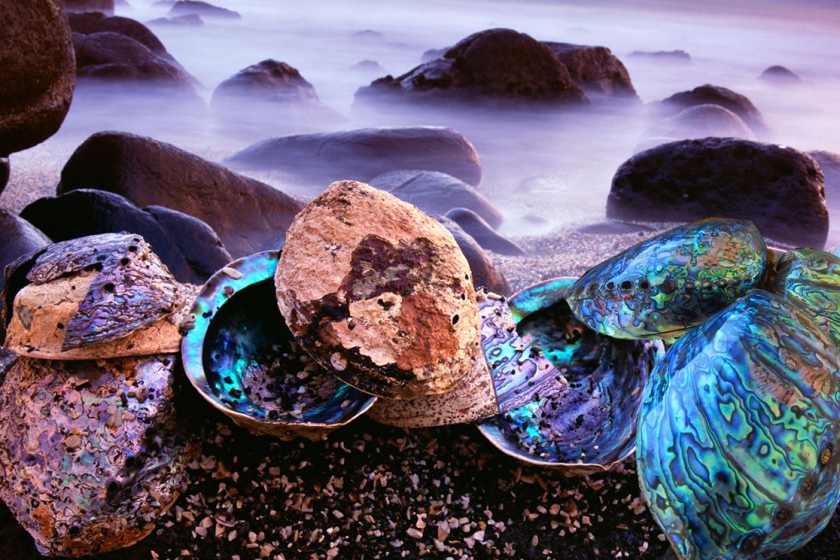 The earthquake earlier this month caused the seabed to raise up around Kaikoura and exposed a lot of paua which is likely to kill them. There’s been quite a bit of controversy over volunteer efforts to save the paua and return them to the sea – over 300 volunteers showed up to help but the government said they may be doing more harm than good in their efforts. There were literally thousands of paua left exposed on the newly created coastline.

Paua is a sea snail that belongs to the Haliotidae family. In the U.S. and some other countries it would be called abalone, muttonfish in Australia, ormer in Great Britain, and perlemoen in South Africa. New Zealand has three species of Paua – Blackfoot, Queen and Virgin. The Blackfoot paua is the most common and grows up to 10 centimeters in width.

Paua shells can be found in just about any gift shop in New Zealand – you’ll see the shells themselves for sale and the shell is used to make jewelry and as decoration in artworks because of their striking blue, green, and purple iridescence. The picture from my blog today was borrowed from Ocean Shell NZ’s website. Ocean Shell says they have been New Zealand’s primary paua shell exporters for 25 years and their website has lots of pictures of paua and details on how paua is graded.

The snails are popular both for the beauty of their shells and for their meat. Paua Co says that the New Zealand paua are “amongst the healthiest, strongest and most organically pure in the world” because of its freshness, cleanliness, and remoteness and from the abundance of ocean currents coming to our shores. I don’t know if that’s true, but the shells certainly are pretty and I’ve heard the meat has a very intense flavor. I haven’t tried it yet because I’ve never really enjoyed seafood from a shell. There are all kinds of recipes for paua but the way I’ve most commonly seen it sold is in fritters at fairs across New Zealand. This video shows someone making fritters at home:

Paua harvesting is very regulated in New Zealand to ensure its survival. Strict catch limits are set for commercial and recreational harvesters with a limit of ten paua per perso per day for recreational harvesting and rules on the sizes that you’re allowed to keep based on the type of paua. You can’t have more than 20 paua in your possession or more than 2.5kg of shucked paua and it can only be caught by free diving – not with scuba equipment.

There’s a black market for abalone meat and poaching is a big industry in NZ. Rules are pretty strict and offenses are heavily fine and may result in your boat and gear being seized and possibly even imprisonment but I think that’s pretty rare.