New Zealand has an insane amount of coastline — for a country as small as we are, we have almost as much coastline as the U.S.! In terms of longest coastlines in the world, the U.S. is number 8 and NZ is number 9. But since NZ has about 4.6 million people and the U.S. has 318.9 million, that means that there’s a kilometer of coastline for every 303 people in New Zealand but in the U.S. it is 16,005 people per km of coastline. And no part of New Zealand is more than 128 kilometers from the ocean!

That number fascinates me. And you can really see it in the beaches here — they are rarely crowded except in the main beaches in the cities. And if you have to share a beach in the country with two other people you start complaining about how crowded it is. There’s a lot of variety in the beaches — different types of sand, water levels, wind and wave action and having different oceans on each side of the islands makes for different water temperatures and wind patterns. 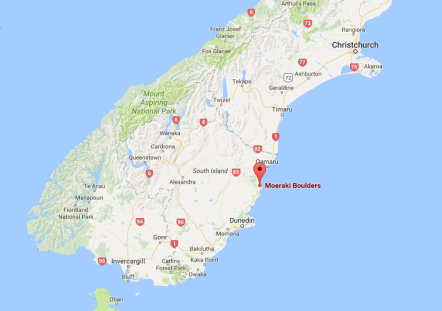 One of the most interesting beaches in New Zealand harbors the Moeraki Boulders. If you’re driving between Dunedin and Christchurch in the South Island, Moeraki Boulders is a great place to stop. They are “unusually large and spherical boulders lying along a stretch of Koekohe Beach” that look a lot like dinosaur eggs or aliens about to hatch and are about 60 million years old!