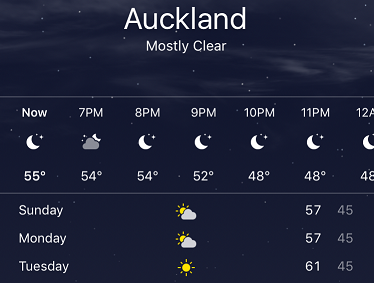 I like to consider myself a woman of the world — I love travel, road trips, new foods, new cultures, and new experiences. And part of being a person of the world means adapting to places you go to.

I moved to New Zealand when I was 44. I had lived with ‘American’ measurements all  my adult life — Fahrenheit, inches, pounds, miles, gallons, etc. Adapting to Celsius, centimeters, kilograms, kilometers and litres (the measurements used by pretty much the rest of the known universe) has been more of a struggle than I expected. Most of the time it doesn’t matter and some of the calculations come easily. But not always. When measuring body weight, for example, I’ve gotten used to the idea that it is 2.2 pounds per kilogram and I do the math roughly in my head and come to the right conclusion most of the time (sometimes in a hurry I multiply the wrong side by 2.2 and everyone laughs at me).

I don’t really pay much attention to gallons and litres — when buying gas (called petrol here), the relative difference between gallons and litres isn’t as important once you fill up the tank the first few times and get over how crazy expensive gas is here compared to the U.S. And when I buy milk, I just pick the one that looks like the right size and it doesn’t really matter if it is a gallon, half gallon, or litres.

But one thing that I have never been able to adapt to is measuring temperatures in Celsius. To be fair, I haven’t tried very hard but I just can’t be bothered to get my head around it and temperature is something that comes up just about every day. It isn’t an issue of math (I love ‘maths’), it’s the relativity and the reflex nature of it that hasn’t yet sunk in. When my step-daughter says it is 35 degrees in Korea, I smile and nod while doing the conversion in my head. It isn’t until I get to 95 Fahrenheit that I say something to the effect of ‘Wow, that’s hot!’. Because I understand the relativity of 95 in Fahrenheit much better than 35 in Celsius.

I’m sure that over time Celsius will become more and more normal. But I have also noticed a tendency lately to stubbornly refuse to adapt on this one measurement. Maybe it’s part of my ‘American-ness’ but I have my iPhone set to Fahrenheit all the time now and I only switch it to Celsius when I need to ‘translate’ to someone else.

If you’re interested, I downloaded a convenient little travel converter application for my phone. It’s called Converter+ and has been really useful to me both traveling and living in NZ. It may not be the best app out there (I haven’t done a big search) but I use it regularly — especially for the NZD to USD exchange rate as that changes regularly. Converter+ converts area, currency, length, temperature, time, etc. and is great for traveling.