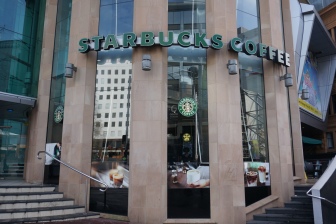 Just like the rest of the known universe, there are plenty of Starbucks in NZ. There are 12-15 stores in Auckland and about 10 other cities have one. The reception to Starbucks by Kiwis is mixed though. In Auckland, especially in the tourist areas, if you go to Starbucks you will most likely be waiting in line and it will be a crowded busy place. And people in Auckland seem to not really care if you drink Starbucks or you do your business with one of the many fun and quirky (but less universal) coffee shops in the city.

In Wellington, however, I have noticed a much different attitude. Wellington is becoming known for good coffee and good beer. And on the few occasions that I’ve been to Starbucks in Wellington, there has been no line at all and the place is practically empty. The first time I went, I carried my Grande Vanilla Latte with the Starbucks logo with me to the office and got teased by no less than three different people before getting to my desk. The last ‘teasing’ was more like ‘sneering’ as they jokingly called me a tourist and said that Wellington had way better coffee than that!

I like Starbucks coffee and I’m from Seattle where they are headquartered and originated so Starbucks is a bit nostalgic for me. Starbucks is so incredibly American though that one NZ newspaper article said that the name has become a broad put-down of “the perceived American habit of commodifying products while hollowing out their worth.” The article goes on to say that it is a brand “we hold up as a warning sign when we want to argue for protecting the local from the advance of the global.”

I guess that is true to some extent.  It explains why companies like Starbucks do better in Auckland (a more globalized city) than in the rest of New Zealand where mom-and-pop shops and local culture seem to be the norm and big chains are less common.

And yes, as the title of the post suggests, New Zealand has the World’s Southern-Most Starbucks. It’s in Invercargill at the bottom end of the South Island. And rumor has it you can buy a Starbucks mug there that actually says it is the world’s southern-most Starbucks on it. But I’ll have to verify that the next time I go to the South Island!