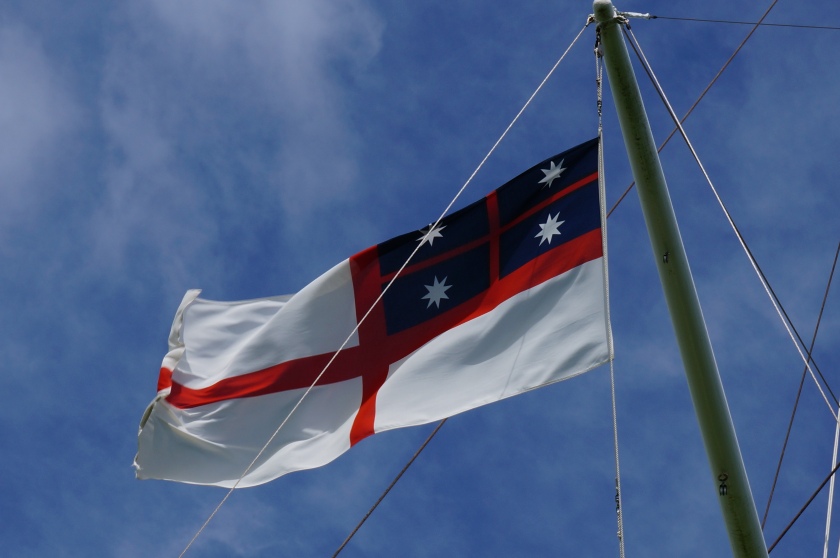 My blog had its 1,000th visitor today and now has over 5,500 views! It’s been fun to do and I hope it has been useful and interesting. And I hope I can keep it up for another 286 days.

New Zealand had a vote earlier this year about whether to change the country’s flag. I’ll write about that another day as it is a story in itself. Today I thought I’d touch on New Zealand’s first national flag – it was chosen at the Waitangi meeting grounds in 1834. The flag was originally created because ships needed a flag to fly so that they could be identified as coming from NZ. Maori leaders were invited to choose from three designs, the result became the Flag of the United Tribes of New Zealand – it is known in Maori as Te Kara.

This flag isn’t very well known in New Zealand though. My partner hadn’t ever seen it before we visited the Waitangi meeting grounds. And it didn’t ever come up (at least not that we heard about) when New Zealand was considering a new flag design. The flag was replaced with the Union Jack in 1840 which didn’t go over well for many Maori.

Ngāpuhi chief Hōne Heke was in favor of the Treaty of Waitangi but later opposed increasing British control of New Zealand. So Hone Heke decided to cut down the flagpole at the British settlement of Kororarea (now the town of Russell) in an effort to show his unhappiness with the British government but without threatening the white settlers. The flagpole was re-erected and he cut it down again. And then it was re-erected and he cut it down again. The last time he tried to cut it down a war started between some Maori and the British troops.

He didn’t prevail in the end and the Union Jack was flown as the flag of New Zealand until 1902 when the current flag was adopted. The current flag is very similar to the Australian flag which is part of the reason that New Zealand wanted to change it earlier this year.My partner will tell you that the dang Aussies copied the New Zealand flag (rather than the other way around) but I haven’t fact-checked him.

The current flag has a royal blue background which comes from the ensign of the Royal Navy. The stars of the Southern Cross represent our location in the South Pacific Ocean and the Union Jack represent New Zealand’s history as a British colony. 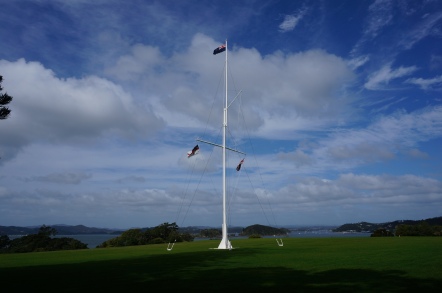 As a newcomer to the country though one thing you may notice is that the flag isn’t seen that often here. In the U.S., you’ll see American flags on flagpoles outside of many houses – especially those of veterans. You’ll commonly see it in front of businesses, schools, government buildings, etc. But in New Zealand, people’s attachment to the flag isn’t as high. I don’t think they are less
patriotic, they are just less attached to the flag as a symbol of their patriotism. You’ll see a few flags flown outside of government buildings and in some cities and occasionally at people’s houses but it will be random and sporadic. I think that’s part of why the attempt to change the flag earlier this year didn’t go through – people just couldn’t be bothered.