I’m from Texas originally and am really attached to Mexican food — and finding good Mexican food overseas can be challenging! I lived in New Zealand for two years and found restaurants that I liked, but nothing that felt authentic.

I’ve been in London for over six months now so decided to get out and about and try my luck here. I’ve been to a few burrito places near my office and they weren’t much worse than a burrito place in Seattle, but nothing to get excited about. So this past weekend I did a little Googling and found a place called Cafe Pacifico in Covent Garden. The reviews on TripAdvisor gave it a 4 out of 5 but one site I found said the ambiance was great but that the food was mediocre. I wasn’t looking for something posh, I wanted something that felt like Tex-Mex so figured it was worth a try.

According to their site, they’ve been open since 1982 and are the oldest Mexican restaurant in London. We found the restaurant quite easily — down a side street and up a flight of stairs and you’re there. As soon as we walked in I knew it was a winner — the tables and chairs and decor felt like they’d fit right in back home and the bar had a great selection of tequilas :-).

The menu doesn’t have a huge selection but I ordered a chimichanga and my friend had their fajitas. I tend to stay away from fajitas in Europe because I just get disappointed with the marinade. But I stole some of my friend’s and it was great! Really well seasoned! My chimichanga was also really good and the homemade guacamole didn’t disappoint either. 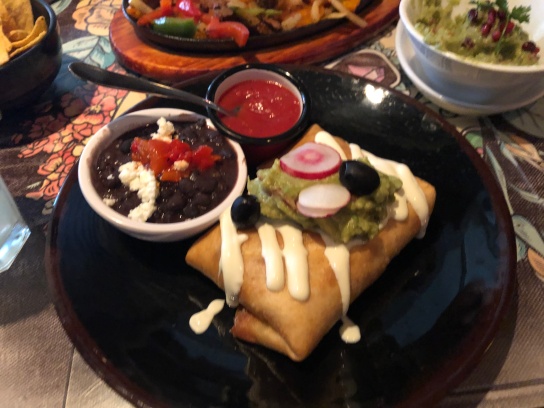 They are also known for the margaritas. They were awarded Best Margarita in London in 2017-2018 and 2018-2019. It lived up to its reputation for sure. I was already planning to go back before we finished dinner, such a pleasant surprise!