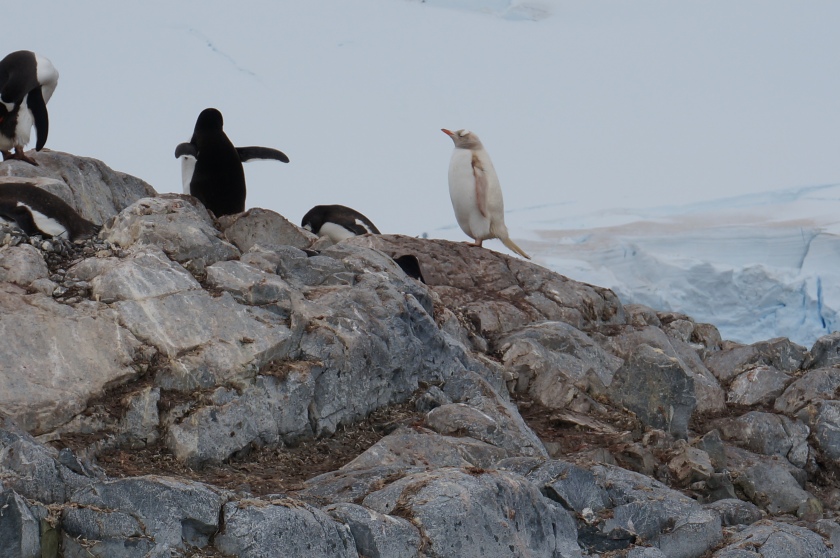 You never know what kind of weather you’ll get in Antarctica, but we were lucky and our second day in Antarctica brought clear skies and reasonable temperatures at about 34 degrees Fahrenheit. So after breakfast we were able to go to Cuverville Island. Cuverville Island has about 6,500 pairs of nesting Gentoo penguins — the largest for this species on the Antarctic peninsula.

Our ship wasn’t able to get too close to the island due to the icebergs but that made it all the more interesting as we were treated to a long zodiac ride through the ice before landing and got to see both a leopard seal and a crab-eater seal sunning themselves on icebergs en-route. The landing was similar to the landing at Aitcho Island — the guides had marked off where we were allowed to walk so as not to disturb the penguins and it was a ‘wet landing’ as before so you got off the zodiac into shallow water and walked ashore.

Cuverville was a penguin paradise and you can see why so many chose to roost there. The penguins who nested early were up in the rocks above us — the sun melted the snow up there earlier than the rest of the island and it was likely safer from predators, but it meant that the penguins had a harder walk from sea up to the rocks. The later nesters were closer to the ocean. But they all used the same tracks to get to the water for the most part which meant that the ice and snow between the nests and the ocean were yellow and brown from penguin guano and very very smelly.

But we didn’t care. And it’s true that the longer you’re there the less you notice the smell, so we spent a lovely hour or so penguin watching. We were further south now so the chicks were younger and smaller. And again the penguins weren’t afraid of us at all and just wandered around us as if we weren’t there. 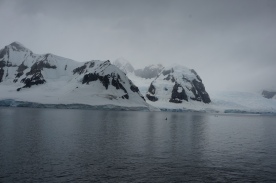 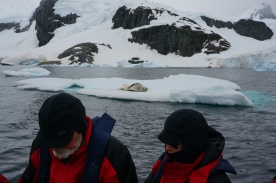 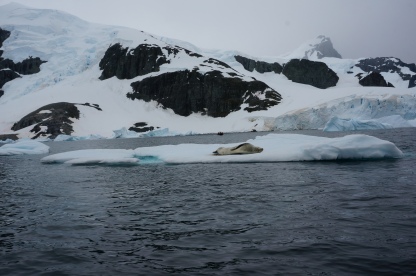 After Cuverville we headed back to the boat for lunch and then were able to make our second expedition of the day to Waterboat Point. Waterboat Point is the home of the Chilean antarctic base — González Videla Base.  The base is the place where the smallest ever wintering-over party (two men) spent a year and a day in 1921-1922 — living under a whaling boat that they turned upside down. It’s a small base that was named after Chilean President Gabriel Gonzalez Videla who was the first chief of state of any nation to visit Antarctica in the 1940s.

Waterboat Point is separated from the mainland at high tide but is still considered part of the Antarctic continent, so this was our first landing on the continent itself. I’m not sure how many people live at the station but it consists of the bunk house, a very small museum and gift shop and a ‘lookout platform’. And, of course, it’s surrounded by penguins. The residents allow you to tour the main living areas of the bunk house and if you go into the museum you can get a personalized certificate to acknowledge that you made it to the Antarctic Continent.

As we were getting ready to board the zodiacs to head back to the ship, we were introduced to Lucy. Lucy is a white penguin who lives at Waterboat Point. She isn’t albino but has a genetic disorder called Leucism. It’s the opposite of melanism and about 1 in 20,000 gentoo penguins have it. Our guide said that Lucy has lived on the point for years and has a ‘normal’ mate and normal chicks.

I loved the reflections when the water was calm

A seal sunning itself on the iceberg 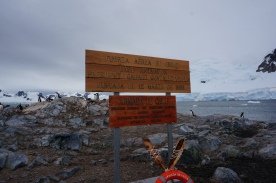 The “museum” at the Chilean station

Penguins at the Chilean station

Lucy the penguin — she has Leucism which makes her white

The dining area in the bunk house at the Chilean station

The living area in the bunk house at the Chilean station 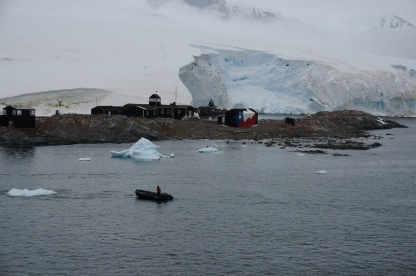