The first time I visited New Zealand, we drove through Otorohanga and stopped at the Kiwi House there. The Kiwi House helps with breeding and conservation of New Zealand’s ‘unique and endangered animals’ including of course the kiwi. It’s not a huge place, but for a $24 fee you can visit the kiwis themselves and explore the park that houses many different birds and some reptiles. 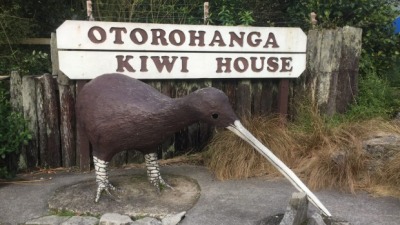 Kiwis are nocturnal, so to have them be active for visitors the lights in their enclosure are dimmed and you have to look carefully to find them. And if you catch the timing right, you can be there when they feed the kiwi. We lucked out on this the first time and just happened to arrive when this was happening. But after that, we planned all of our visits for feeding time.

At feeding time, the handler came in and told us about the kiwi, explained how they eat, and said that the kiwi might get aggressive when the handler entered the habitat so not to be surprised or concerned. And then he started to open the gate and the game was on! Kiwis are very territorial and Atu, a great spotted kiwi, was especially so. As soon as Atu saw the handler she started body slamming him. Which was funny since Atu was about a foot and a half tall and mostly feathers! But she was fearless and didn’t seem to care that she was a pint-sized nuisance. She would get a running start and then bash into the handler’s legs, grab at him with her beak (he had on protective overalls), and harass him incessantly – only taking a break to eat some of the food he provided before starting over again. After the feeding, we visited the other kiwis but they weren’t as territorial and didn’t mind the handlers. It was only Atu who had her game on.

We went back about six months later to show my mom. And again Atu was the star of the show. This time it was a female handler but the reaction was the same. More running starts and body slamming and strutting around the enclosure like she owned the world.

I was very sad to read in the news that Atu passed away about a month ago. She had surgery to address issues with egg production and she died from complications afterward. There were 600 people who came to pay their respects to her – which just goes to show that I’m not the only one who appreciated her.