One of my favorite quirky towns of New Zealand is the lovely little town of Bulls. With a population of about 1,600 people, Bulls is located at the junction of highway 1 and highway 3, just West of Palmerston North in the North Island. If you’re taking highway 1 through the North Island then you’ll pass right through it.

Bulls got its name from James Bull who apparently opened a general store there at some point in its history. It was called Bull Town originally and then renamed to Bulls.

But what makes this one of the quirkiest towns in New Zealand is that it is the puniest town in New Zealand – I don’t know how it got started but the whole town seems to have joined in to make Bulls as memorable as possible. Throughout the town are signs and slogans with puns so bad you will groan out load over and over and over again.

We can start with the town slogan – “Herd of bulls? It’s a town like no udder.” The parking lot is “park-a-bull”, the information centre is “inform-a-bull”, the city restrooms are “relieve-a-bull”. There’s a café called the “Bull’s Eye Café”. The trash and recycling bins are labeled “response-a-bull”. One of the shops is called “Scents-a-Bull”. The city police station is labeled “Const-a-Bull” with a mural of bulls in police uniforms. Even the city Subway sandwich shop got in on the game with a sign out front labeled “Submerge-a-Bull”.

It’s a fun distraction to drive around town looking for puns and signs but there’s not a lot to the town to see otherwise. There is a yummy kebab place right next to “Feast-a-Bull” – Jabies Doner Kebabs is well worth the stop if you’re driving through town and hungry. Do NOT order the large unless you’re crazy hungry as their portions are huge!

As an interesting side note, apparently New Zealand’s first armed robbery took place at the Bulls BNZ in 1946. 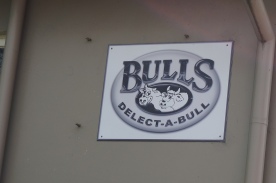 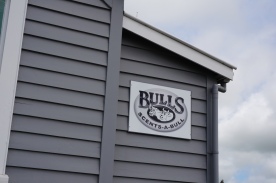 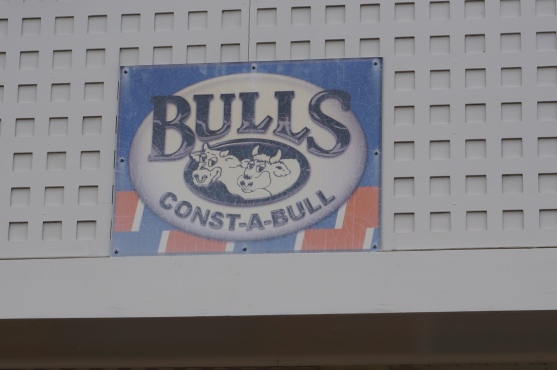